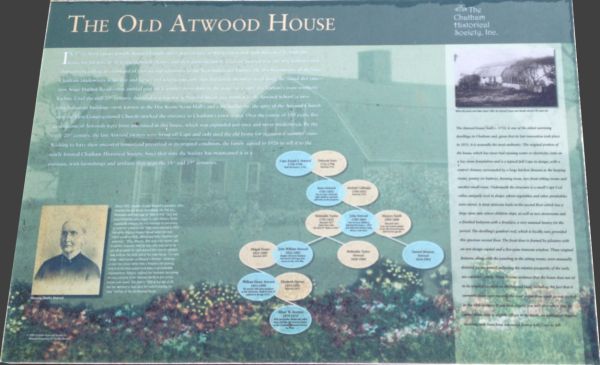 Website
This plaque at located the Atwood House & Museum tells the story of the old Atwood House.

In 1752, Sea Captain Joseph Atwood bought thirty acres of land in this location and soon thereafter he built this house for his wife of 10 years, Deborah (Sears), and their growing family. Captain Atwood was one of Chatham's first shipmasters, sailing in command of two-masted schooners to the West Indies and Europe. He also became one of the large Chatham landowners in his day and for several generations only Atwood family members lived along the rutted dirt lane - now Stage Harbor Road - that ambled past the Captain's front door to the stage [or wharf] at Chatham's main southerly harbor. Until the mid-20th century, this road was known as Atwood Street; just north was the Atwood School (a two-story Italianate building - now known as the Doc Keene Scout Hall); and a bit further on, the spire of the Atwood Church (now the First Congregational Church) marked the entrance to Chatham's town center. Over the course of 150 years, five generations of Atwoods were born and raised in this house, which was expanded just once and never modernized, By the early 20th century, the last Atwood owners were living off Cape and only used the old house for occasional summer visits. Wishing to have their ancestral homestead preserved in its original condition, the family agreed in 1926 to sell it to the newly formed Chatham Historical Society. Since that time the Society has maintained it as a museum, with furnishings and artifacts that span the 18th and 19th centuries.

The Atwood house, built c. 1752, is one of the oldest surviving dwellings in Chatham and, given that its renovation took place in 1833, it is assuredly the most authentic. The original portion of the house, which has never had running water or electricity, rests on a low stone foundation and is a typical full Cape in design, with a central chimney surrounded by a large kitchen (known as the keeping room), pantry (or buttery), borning room, two front sitting rooms and another small room. Underneath the structure is a small Cape Cod cellar, uniquely oval in shape, where vegetables and other perishables were stored. A steep staircase leads to the second floor which has a large open attic where children slept, as well as two storerooms and a finished bedroom with a fireplace, a very unusual luxury for the period. The dwelling's gambrel roof, which is locally rare, provided this spacious second floor. The front door is framed by pilasters with an urn design capital and a five-paned transom window. These original features, along with the paneling in the sitting rooms, were unusually detailed for the period, reflecting the relative prosperity of the early sea captain's family. There is some evidence that the house does not sit in its original location on the Atwood land, including the fact that it currently faces west toward the road rather than south as was typical in the 18th century. If you look closely, you will also notice that the center front door is slightly off-set to the north, an indication that the dwelling may have been expanded from a half-Cape to full.