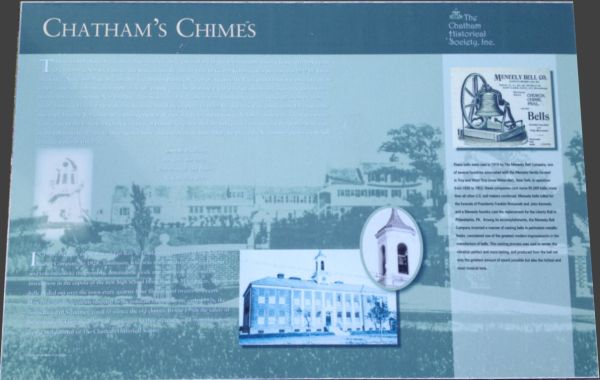 Website
This plaque located at the Atwood Museum tells the story of Chatham's Chimes.

This set of bells began their existence in the clock tower of one of this town's notable historic homes overlooking the Old Harbor in North Chatham. The house, originally built in 1806 by George Kendrick, was purchased in 1917 by Rufus and Grace (Nickerson) Page. Because they had an outstanding collection of antiques, the Pages turned what was once a relatively simple house into a beautiful example of an 18th century estate by adorning it with paneling, doors, and fixtures acquired from historic houses throughout New England. They made several additions to the their rambling residence, including an observation tower constructed beyond the stables at the north end of the property. In 1919, Mr. and Mrs. Page commissioned the nationally-renowned Meneely Bell Company to provide them with a set of bells for installation in the tower, along with a clock to operate them (made by E. Howard Clock Company of Boston). Once installed, the bells chimed four notes at the quarter hour, eight on the half hour, twelve on the three-quarter hour, and sixteen on the hour. They also played the Westminster chimes on the full hour, the words of which are: Lord in this hour; Be Thou our guide, That through Thy Power, No foot may slide.

In 1923, the Page estate was sold to Roy S. Tomlinson, President of the National Biscuit Company. In 1925, Tomlinson, who was in the midst of more additions and renovations to the property, donated the clock and chimes to the town for installation in the cupola of the new high school being built on Main Street. The bells pealed out over the town every quarter hour for the next twenty-five years. However, nearby residents objected to the constant ringing. In the early 1950s, the Town Board of Selectmen voted to silence the old chimes. By the 1980s the safety of the structure holding the bells was in question so they were removed from the school cupola and donated to The Chatham Historical Society.

These bells were cast in 1919 by the Meneely Bell Company, one of several foundries associated with the Meneely family located in Troy and West Troy (now Watervliet), New York. In operation from 1826 to 1952, these companies cast some 65,000 bells, more than all other U.S. bell makers combined. Meneely bells tolled for the funerals of Presidents Franklin Roosevelt and John Kennedy and a Meneely foundry cast the replacement for the Liberty Bell in Philadelphia. PA. Among its accomplishments, the Meneely Bell Company invented a manner of casting bells in perforated metallic flasks, considered one of the greatest modern improvements in the manufacture of bells. This casting process was said to render the vibration perfect and more lasting, and produced from the bell not only the greatest amount of sound possible but also the richest and most musical tone.