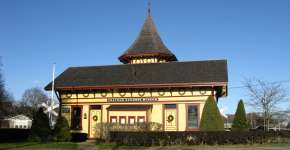 Chatham Railroad Museum
153 Depot Road
Chatham, MA
Phone: 508-945-5780
Phone: (508) 945-2493
Website
The Chatham Railroad Museum is located in the old Chatham Railroad Company station on Depot Road, and has parking space at the door. The building is now over 130 years old and on the original site. A striking example of Victorian-era architecture, the railroad depot was the stepping off – and on – point for riders of the old Chatham Railroad, which served the town with a seven-mile strip of railway for about fifty years from 1887 to 1937. In 1951, Mrs. Jacob Cox of Cleveland, Ohio and Chatham purchased the structure and land as a gift to our town. It was restored as a country depot and opened as a museum in 1960. It was added to the National Register of Historic Places in 1978.

The Chatham Railroad Museum is open Tuesday thru Saturday from 10:00am to 4:00pm, from mid-June through mid September. It is manned by an experienced group of volunteers from all Cape Cod. There have been over 300,000 visitors since the first season. It grows in size each year. The exhibits, starting with a relic of the first commercial railroad in the U.S. in 1826, include hundreds of items of historical significance in the railroad field, plus models and objects which never fail to interest the visitors. Entering the museum, you are surrounded by the sounds of the bygone era of steam; and in entering the Ticket Agent office, the sounds of a telegraph key add to the atmosphere.

The 105-year old caboose of olden days, the gift of the New York Central System, has been fully restored and is open for all to enjoy the sounds of the rails as well as an informative video display about cabooses. Young and old will enjoy the trip through this Home on Wheels of the railroad train crews. The diorama of the Chatham yards of about 1915 modeled in a scale of 1/8 inch to the foot is a special feature, and a must see exhibit. The museum can be opened after season closing for groups by special arrangements. Donations are accepted. Handicapped accessible.