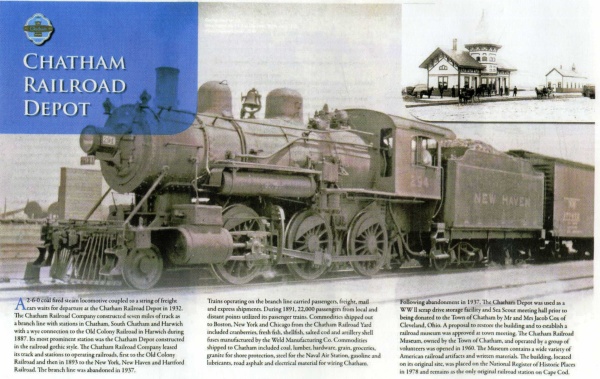 A 2-6-0 coal fired steam locomotive coupled to a string of freight cars waits for departure at the Chatham Railroad Depot in 1932. The Chatham Railroad Company constructed seven miles of track as a branch line with stations in Chatham, South Chatham and Harwich with a wye connection to the Old Colony Railroad in Harwich during 1887. Its most prominent station was the Chatham Depot constructed in the railroad gothic style. The Chatham Railroad Company leased its track and stations to operating railroads, first to the Old Colony Railroad and then in 1893 to the New York, New Haven and Hartford Railroad. The branch line was abandoned in 1937.

Following abandonment in 1937, The Chatham Depot was used as a WWII scrap drive storage facility and Sea Scout meeting hall prior to being donated to the Town of Chatham by Mr and Mrs Jacob Cox of Cleveland, Ohio. A proposal to restore the building and to establish a railroad museum was approved at town meeting. The Chatham Railroad Museum, owned by the Town of Chatham, and operated by a group of volunteers was opened in 1960. the Museum contains a wide variety of American railroad artifacts and written materials. The building, located on its original site, was placed on the National Register of Historic Places in 1978 and remains as the only original railroad station on Cape Cod.