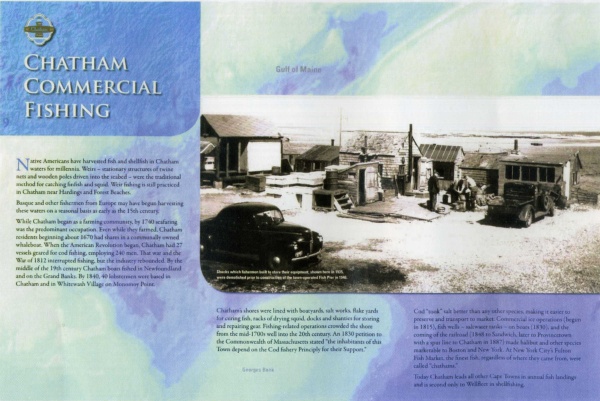 Native Americans have harvested fish and shellfish in Chatham waters for millennia. Wiers - stationary structures of twine nets and wooden poles driven into the seabed - were the traditional method for catching finfish and squid. Weir fishing is still practiced in Chatham near Hardings and Forest Beaches.

Basque and other fishermen from Europe may have begun harvesting these water on a seasonal basis as early as the 15th century.

While Chatham began as a farming community, by 1740 seafaring was the predominant occupation. Even while they farmed, Chatham residents beginning about 1670 had shares in a communally owned whaleboat. When the American Revolution began, Chatham had 27 vessels geared for cod fishing, employing 240 men. That war and the War of 1812 interrupted fishing, but the industry rebounded. By the middle of the 19th century Chatham boats fished in Newfoundland and on the Grand Banks. By 1840, 40 lobstermen were based in Chatham and in Whitewash Village on Monomoy Point.

Chatham's shores were lined with boatyards, salt works, flake yards for curing fish, racks of drying squid, docks and shanties for storing and repairing gear. Fishing-related operations crowded the shore form the mid-1700s well into the 20th century. An 1830 petition to the Commonwealth of Massachusetts stated "the inhabitants of this town depend on the Cod fishery Principly for their Support."

Cod "took" salt better than any other species, making it easier to preserve and transport to market. Commercial ice operations (begun in 1815), fish wells - saltwater tanks - on boats (1830), and the coming of the railroad (1848 to Sandwich, later to Provincetown with a spur line to Chatham in 1887) made halibut and other species marketable to Boston and New York. At New York's Fulton Fih Market, the finest fish, regardless of where they came from, were called "chathams."

Today Chatham leads all other Cape Towns in annual fish landings and is second only to elllfleet in shellfishing.