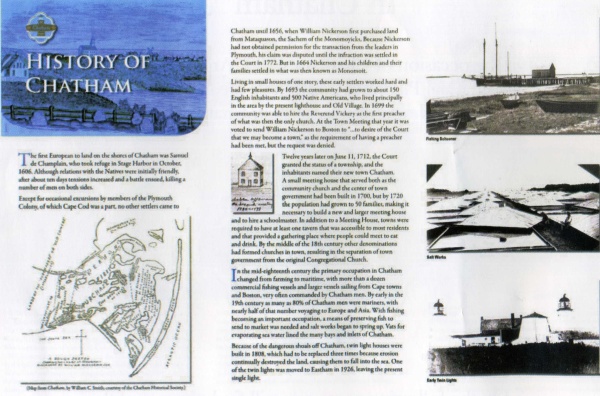 Two plaques located in front of the Town Offices at the corner of Main St. and Cross St. tell the story of Chatham's history. Click on More Info to see images of the plaques and read the history written on these plaques.

The first European to land on the shores of Chatham was Samuel de Champlain, who took refuge in Stage Harbor in October, 1606. Although relations with the Natives were initially friendly, after about ten days tensions increased and a battle ensued, killing a number of men on both sides.

Except for occasional excursions by members of the Plymouth Colony, of which Cape Cod was a part, no other settlers came to Chatham until 1656, when William Nickerson first purchased land from Mataquason, the Sachem of the Monomoyicks. Because Nickerson had not obtained permission from the leaders in Plymouth, his claim was disputed until the infraction was settled in court in 1772. But in 1664 Nickerson and his children and their families settled in what was then known as Monomoit.

Living in small houses of one story, these early settlers worked hard and had few pleasures. By 1693 the community had grown to about 150 English inhabitants and 500 Native Americans, who lived principally in the area by the present lighthouse and Old Village. In 1699 the community was able to hire the Reverend Vickery as the first preacher of what was then the only church. At the Town Meeting that year it was voted to send William Nickerson to Boston to “... to desire of the Court that we may become a town,” as the requirement of having a preacher had been met, but the request was denied.

Twelve years later on June 11, 1712, the Court granted the status of a township, and the inhabitants named their new town Chatham. A small meeting house that served both as the community church and the center of town government had been built in 1700, but by 1720 the population had grown to 50 families, making it necessary to build a new and larger meeting house and to hire a schoolmaster. In addition to a Meeting House, towns were required to have at least one tavern that was accessible to most residents and that provided a gathering place where people could meet to eat and drink. By the middle of the 18th century other denominations had formed churches in town, resulting in the separation of town government from the original Congregational Church.

In the mid-eighteenth century the primary occupation in Chatham changed from farming to maritime, with more than a dozen commercial fishing vessels and larger vessels sailing from Cape towns and Boston, very often commanded by Chatham men. By early in the 19th century as many as 80% of Chatham men were mariners, with nearly half of that number voyaging to Europe and Asia. With fishing becoming an important occupation, a means of preserving fish to send to market was needed and salt works began to spring up. Vats for evaporating sea water lined the many bays and inlets of Chatham.

Because of the dangerous shoals off Chatham, twin light houses were built in 1808, which had to be replaced three times because erosion continually destroyed the land, causing them to fall into the sea. One of the twin lights was moved to Eastham in 1926, leaving the present single light.

Like all towns in the country, Chatham was very much involved in the Civil War. More than 264 men saw action on the battlefields, of whom 16 lost their lives. But the conflict had little effect on the way Chatham people lived their lives, as the town was isolated from the influences of the industrial expansion that occurred elsewhere following the war. In fact, the population declined from a high of 2700 in 1860 to 1500 in 1910.

Since Chatham retained its rural characteristics and its natural beauty, tourists began to visit during the latter part of the 19th century, either to enjoy the cool summers or to take advantage of the abundance of game, especially on Monomoy. With the arrival of the railroad in 1897, the number of lodgings began to climb, including such large hotels, such as the Hotel Chatham (1890-1895) and the Chatham Bars Inn (1914). Early in the 20th century interest in acquiring or building seasonal homes expanded greatly. By 1925 there were more than 8 hotels in town, and of the approximately 900 dwellings almost half were seasonal residences, a ratio that continues today. The development of Chatham as a summer resort brought with it the establishment of golf clubs, a beach club, and yacht clubs.

During World War I, 78 out of a population of 1167 served in the armed forces, and the federal government took over operation of the Marconi Wireless Station that had been constructed at Ryder's Cove in 1914. The Navy built an Air Station on 36 acres at the eastern end of Eastward Point, which operated until 1923. It was there that the NC-4 stopped for repairs before making the first trans-Atlantic flight.

During this same period Chatham grew to the point where it established its first fire department in 1911, with a staff of three, and the first police department in 1922, consisting of four men, three of whom were Eldridges.

In 1926 an increasing population required a new central school that was built next to the 1858 graded school and incorporated that building. It served grades K - 12 until the junior-senior high school opened in 1963 on Crowell Road and an Elementary School rose on Depot Road. It also housed the Selectmen's Office until the present one was acquired in 1948. That 1926 school is now the Chatham Community Center.

World War II brought service personnel to town, along with black outs, air raid sirens, Coast Guardsmen patrolling the beaches, and U.S.O. centers. Many of those stationed in Chatham settled here after the war.

From 1950 through 1970 housing developments, such as Harbor Coves and Riverbay Estates, were created, resulting in a rapidly increasing year-round population, which was 2500 in 1945 and reached 4,500 in 1965. At the same time many more summer homes were built and tourism increased to the point where the summer population was over 20,000. In 2012 tourism had become the primary industry and provided income to most of the residents.

With this growth the town expanded the fire and police departments, experienced building to the point where the town nearly reached total build-out, and town government vastly expanded, requiring a larger Town Hall, an even larger Town Hall Annex, and a greatly enlarged Police Station., both built in 2011. The effect on natural resources resulted in the need for a central sewer system to protect the waters from pollution, and a Conservation Commission to police the environment.

But in spite of all these changes, Chatham with its natural beauty had retained its appeal to residents and visitors alike, and every effort is made to protect its historic legacy and maintain its charm. Nevertheless as Chatham begins its next century, it is aware of the need to evolve the the changes that inevitably will come.