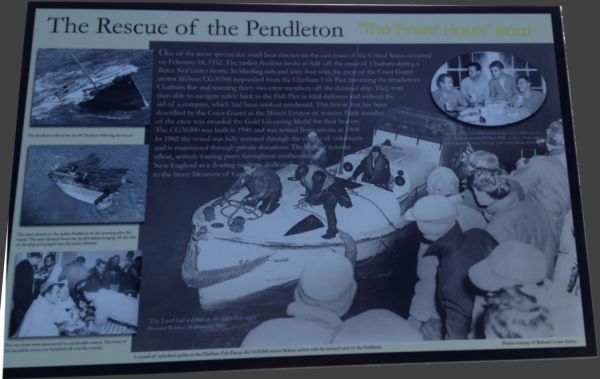 The Pendleton Rescue
Lighthouse Parking Area
, MA
The story of the Coast Guard Pendleton rescue is told on a plaque located at the Lighthouse Beach parking overlook, across from the Chatham light. Since the time this plaque was installed, the story has been re-told in the book and movie The Finest Hours.

One of the most spectacular small boat rescues on the east coast of the Unites States occurred on February 18, 1952. The tanker Pendleton broke in half off the coast of Chatham during a fierce Nor'easter storm. In blinding rain and sixty foot seas, the crew of the Coast Guard motor lifeboat CG36500 responded from the Chatham Fish Pier, traversing the treacherous Chatham Bar and rescuing thirty-two crew members off the doomed ship. They were then able to navigate safety back to the Fish Pier in total darkness and without the aid of a compass, which had been washed overboard. This heroic feat hs been described by the Coast Guard as the Mount Everest of rescues. Each member of the crew was awarded the Gold Lifesaving Medal for their bravery. The CG36500 was built in 1946 and was retired from service in 1968. In 1982 the vessel was fully restored through the efforts of volunteers and is maintained through private donations. The lifeboat remains afloat, actively touring ports throughout southeastern New Englandas a floating museum dedicated to the brave lifesavers of Cape Cod.