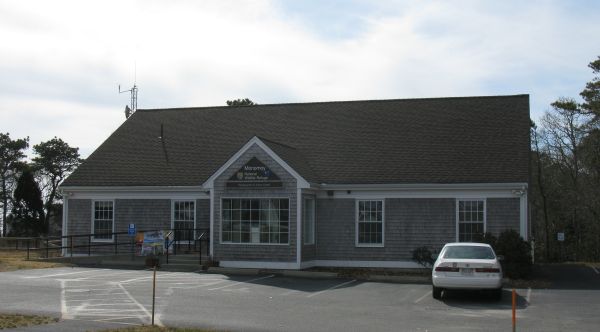 Monomoy National Wildlife Refuge consists of North and South Monomoy Islands, Minimoy Island and a portion of Morris Island. The 7,921-acre refuge stretches approximately nine miles southward into the waters of Nantucket Sound and the Atlantic Ocean. Ninety-four percent of Monomoy's acreage was designated a Wilderness Area in 1970, and is managed under the guidelines of the Wilderness Act of 1964. It is the only Wilderness Area in southern New England.

To reach the headquarters on Morris Island, take Route 6 east to Route 137 south to Route 28. A left turn takes you through downtown Chatham (about 3 miles.) Turn right at the stop sign, to the Chatham Lighthouse and Coast Guard Station. Take the first left after the lighthouse, then the first right. Follow Morris Island Road to signs for the Refuge on the left.

Chatham is a mecca for bird enthusiasts. In autumn, Cape Cod is a veritable trap for birds of numerous species. Its temperate climate attracts many birds through the winter when most have winged south. The summer and fall months see the migration at its height. Chatham, with the Monomoy Islands, affords unparalleled opportunities to observe many species, both rare and common. Nearly every species recorded from New England has been seen at some time in this area. The Monomoy National Wildlife Refuge is a link in the chain of migratory waterfowl refuges along the Atlantic Flyway, and is designated in the Western Hemisphere Shorebird Reserve Network.

The refuge provides nesting, feeding and resting grounds for a known 285 species. This is one of the most famous and productive ornithological points on the Atlantic seaboard. Access is by short boat trip from Chatham, and local boat charters are available. Massachusetts Audubon Society's Wellfleet Bay Wildlife Sanctuary conducts seasonal guided natural history tours of Monomoy. Call (508) 349-2615 for information or reservations.

All persons using the Refuge are asked to comply with local, State, and Federal laws, regulations, and ordinances, as well as with the following conditions:
1. Public use of designated trails within the Refuge for wildlife observation, study, and photography is permitted from sunrise to sunset. Surf fishing on Morris Island is permitted 24 hours.
2. On Morris Island, pets are prohibited from May 1 through September 15 to protect wildlife. Dogs must be on a short hand-held leash outside of these dates. No pets are permitted on the Monomoy Islands.
3. Motorized vehicles are restricted to the entrance roads and parking areas.
4. Hunting, shooting, fires, and camping are not permitted.
5. Entry into closed areas is prohibited. Portions of the Refuge are seasonally closed to protect sensitive wildlife from human disturbance. Signs mark these areas.