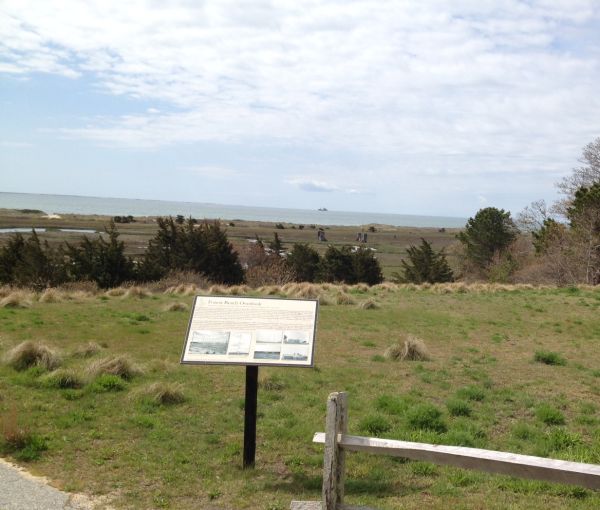 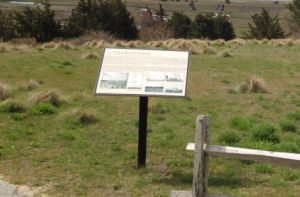 This plaque located in South Chatham overlooking Nantucket Sound tells the story of the field of transmission towers formerly located here that were associated with WCC Chatham, now the Chatham Marconi Maritime Center.

This land and the view you see before you were made available to the public in 1999 due to the efforts of a grass roots neighborhood organization, Friends of Forest Beach, together with the cooperation of the Town of Chatham Selectmen, voters and the generosity of an international company formerly known as MCI WorldCom. At the 1999 Chatham Town Meeting, voters unanimously approved the purchase of over 91 acres (17 acres located in Chathamport) for $950,000. It was said at the meeting: “the purchase represents everyone in Chatham pulling together, people who were born here, wash-a-shores, summer residents, Board of Selectmen, Friends of Forest Beach and MCI International. All have pulled together in exactly the same direction and have worked hard to accomplish this” (1999 Annual Town Report). On April 19, 2000 in Boston, the U.S. Environmental Protection Agency presented an Environmental Merit Award to the Friends of Forest Beach, the Town of Chatham and MCI WorldCom for their cooperative and “outstanding efforts in preserving New England's environment.”

This is the site of the former South Chatham Marine Radio Transmitting Station WCC. It was built by RCA in 1946. This station served as an auxiliary to the North Chatham WCC Receiving Station built by Guglielmo Marconi in 1914. During peak years of operation it relayed over one thousand messages a day and was able to reach ships around the world. The transmitting station antennae field covered many acres of the marsh. As a condition of the sale, MCI WorldCom agreed to remove the 300 foot tower and more than 90 poles from the marsh, as well as the residence and operation building located on the upland portion of the property. The poles you see in the marsh were left so that they could be used as nesting sites for the Osprey that inhabit the marsh.